The darkest evil imaginable right here in Minnesota, ties to Hibbing, and the Twin Cities! I’ve exposed what’s known as the Minnesota Connection, responsible for the child sex trafficking and murders of my daughter and granddaughter. I name names on Twitter. @DebMatheny 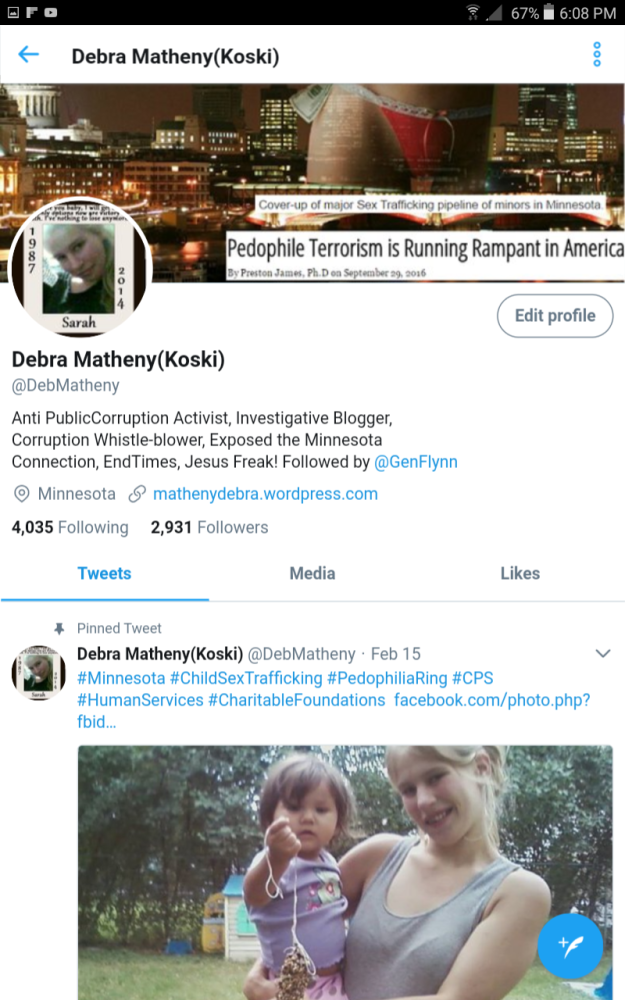 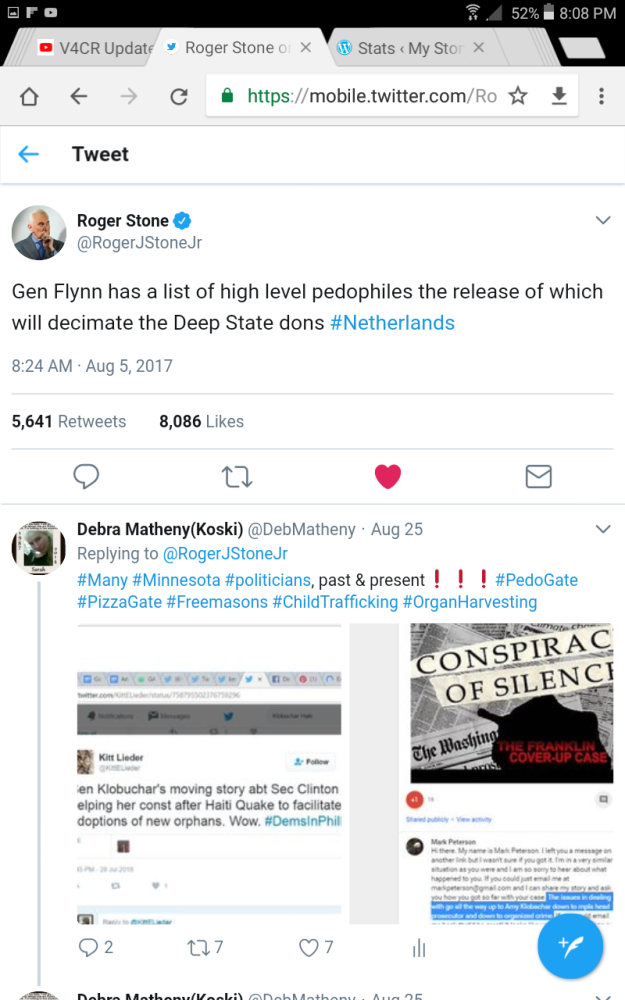 A. Paul Monteen Coordinator of Training, Minnesota POST Board, involved in predicate criminal activities indicative to a Racketeered, Influenced, Corrupt Organization, confirmed by the continuing pattern of conduct (OR LACK THEREOF) TO ADDRESS THE CORRUPT PEACE OFFICERS PER THIS STATE OF MINNESOTA ETHICS BOARD! I SUBMITTED AN 84 PAGE REPORT ON SEVERAL EMPLOYEES WITHIN THE MINNESOTA ST LOUIS COUNTY SHERIFF DEPARTMENT. Not a one was disciplined in spite of proof in the form of court litigation (maliciously maintained structures by Gerald and Judy Clark aided and abetted in the DEPRIVATION OF FREEDOM OF MOVEMENT by the St Louis County Sheriff Department) and current reports of aiding and abetting in the deprivation of property BOTH OF WHICH ARE CONSTITUTIONAL RIGHTS! See news reports and my discoveries as proof posted to my petition page~

I traced a threatening email I received, which threatened to blow up my dads home (he lived next door at the time of threat) and my home, that was sent from a proxy email address to the State of Minnesota Offices of A. Paul Monteen~ This was reported to the CORRUPT Minneapolis FBI something else I discovered within the last year is a retired FBI Agent out of the Minneapolis Minnesota Field Office has ties to the Domestic Terrorists next door, Gerald and Judy Clark and other within this Organized Crime ring operating on the Range, State Wide and Interstate!  It is the CORRUPTION INDUCED APATHY OF IGNORED REPORTS FOR 7 YEARS AND LACK OF ACTION TO INVESTIGATE THE REPORTS MY DAUGHTER WAS KIDNAPPED IN 2010 AND AGAIN INVOLVED WITH HER TRAFFICKERS THIS SPRING, THAT SHE WAS MURDERED A LITTLE OVER 2 WEEKS AGO! A TRAGEDY THAT SHOULD HAVE AND COULD HAVE BEEN AVOIDED!

MORE Minnesota Department of Public Safety Corruption within (Suzanne Elwell) Minnesota Office of Justice Programs AND NOW MY YOUNGEST DAUGHTER IS DEAD, SURVIVED BY HER LIL 5 YEAR OLD DAUGHTER AND I AM UTTERLY DISGUSTED AND DISTRAUGHT OVER THIS HEINOUS TRAGEDY THAT WAS SO NEGLIGENTLY IGNORED BY ALL I SOUGHT TO HELP ME, NON STOP PLEAS, SINCE 2007!  https://www.facebook.com/matheny.debra/posts/701930253186635

Help and protection from the MASSIVE RICO I’VE EXPOSED HAS BEEN SOUGHT BY MANY AN APATHETIC AGENCY, MN STATE OFFICE AND OFFICIAL, SPANNING YEARS OF DOMESTIC TERRORISM! FBI – Federal Bureau of Investigation, Chuck Grassley!

As with EVERY STATE AGENCY I requested assistance from, within the last 7 years, including the Attorney Generals Office of Minnesota, replied, with the final outcome, as not within our jurisdiction to investigate! The judicial Standards board (2 complaints) even went as far as to totally misinterpret my request, even changing it’s wording in his (David S. Paul) written statement in response to said complaints!